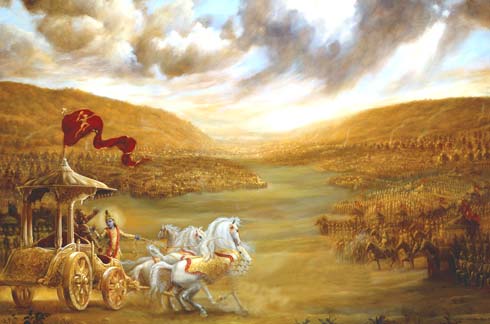 Once Krishna and Arjuna were walking towards a village. Arjuna was pestering Krishna, asking him why Karna should be considered an unparallelled Donor & not him ?

Then said, “Arjuna, distribute these two gold mountains among villagers, but you must donate every bit of it “.

Arjuna went into the village, and proclaimed he was going to donate gold to every villager, and asked them to gather near the mountain. The villagers sang his praises and Arjuna walked towards the mountains with a huffed up chest.

For two days and two nights Arjuna shovelled gold from the mountain and donated to each villager. The mountains did not diminish in the slightest.

Most villagers came back and stood in queue within minutes. Now Arjuna was exhausted, but not ready to let go of his Ego, told Krishna he couldn’t go on any longer without rest.

Then Krishna called Karna and told him to donate every bit of the two gold mountains.

Karna called the villagers, and said “Those two Gold mountains are yours. ” and walked away.

Arjuna sat dumbfounded. Why hadn’t this thought occurred to him?

Krishna smiled mischievously and told him “Arjuna, subconsciously, you were attracted to the gold, you regretfully gave it away to each villager, giving them what you thought was a generous amount. Thus the size of your donation to each villager depended only on your imagination.

Karna holds no such reservations. Look at him walking away after giving away a fortune, he doesn’t expect people to sing his praises, he doesn’t even care if people talk good or bad about him behind his back. That is the sign of a man already on the path of enlightenment”.

Giving with an Expectation of a Return in the form of a Compliment or Thanks is not a Gift, then it becomes a Trade.

“Give without expecting anything in Return.”